Signs Outlet has unveiled the new much awaited 1199 plan and now it is open to public , in which new business owners will get their store front sign, which is

Also an open sign or 500 business cards are offered for free.

We want to thank everybody for attending the annual Signs Outlet BBQ on Friday and for everybody’s efforts to make it successful. 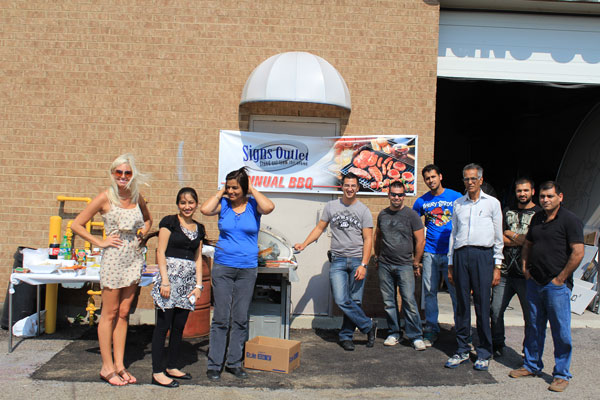 Let us extend our special thanks to Bittu, Bruce,  Johnny, Manish Jain,  Manpreet, Randy, Rash, Ray Saini, Renu, Sajid, Shalleah, Upendra and Vijay (names are in alphabetical order), who all have made the difference by attending and organizing the event. Although we missed Garry, who could not make it as he was not in town.

The weather was gorgeous but it was too windy at one point  & it became challenge to lit up the BBQ, but with efforts by Johnny, Randy and Shalleah, we were able to change the position of BBQ and made it happen.

Vijay  &  Manpreet set up the BBQ & the table,  Shalleah and Rash took the initiative and put everything together on the table and organized in the BBQ. While Randy started the cooking.

There were few vegetarians & Halal, so they cook according to everybody’s requirements.

Bruce was at the customers place doing some training; he came bit late but joined and enjoyed the party.

There were few customers, who came in, and we invited them to join us for the event.

So, thank you once again everybody and we look forward to Christmas Party coming December by which time we will have the next door unit and couple of more people on board.

Best wishes to all of you and your family and we hope to see you with your families on Christmas party.

Hope everybody will enjoy the Long labor weekend.